One area of interest is whether directors of firms that failed say-on-pay fare poorly in future re-election bids, particularly those who serve on the comp committee. Semler Brossy Consulting Group recently tallied data indicating that these directors do experience a backlash in the following year. 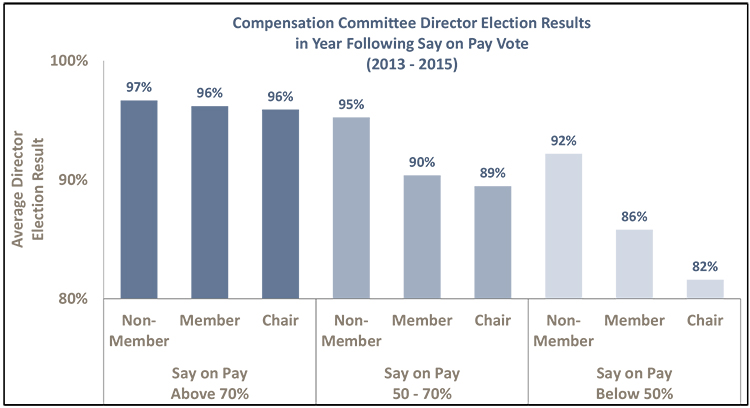 These comp committee directors can expect Institutional Shareholder Services (ISS) to suggest an “against” or “withhold” recommendation on their elections as well. Research shows such directors receive negative vote recommendations four times more often than directors whose companies pass say on pay.

As an example of the impact of a failed say on pay vote, consider the experience of two companies:

Cogent Communications is an internet provider based in Washington, D.C. that has failed the say-on-pay vote for three consecutive years (2013 – 2015). In turn, support for the comp committee has eroded. Comp committee directors received an average of 82% support in 2013. By 2015, support fell sharply to 60%. Other directors at Cogent experienced a decline in support as well — from 89% in 2013 to 76% in 2015. This followed “withhold” recommendations from ISS for all directors.

TCF Financial is a bank holding company in Wayzata, Minn. that received say-on-pay votes of 61% in 2013, 45% in 2014 and 31% in 2015. Comp committee support similarly fell during this period. The comp committee chairman received 97% vote support in 2013. Shareholder support plunged to 63% by 2015 following a “withhold” recommendation from proxy advisers.

These cases underline the importance of proactively addressing and monitoring say-on-pay results. A poor vote result puts director elections at greater risk in the following year, and requires a board-led response. Directors of companies with a poor or failed vote can take three steps towards resolving pay criticism, and in turn, assuaging fears of re-election troubles:

Engage: Conduct one-on-one conversations with major shareholders, as well as any shareholders that have expressed dissatisfaction in the past. Tell your side of the story and hear out investor concerns. Directors, not management, should spearhead the dialogue. Among the most effective actions is for the chairman alone to reach out to shareholders and proxy advisers. That will demonstrate firsthand the committee’s commitment to good governance and shareholder alignment.

Reassess: Review prior feedback on pay from shareholders and proxy-advisory firms. Reassess the rationale for program elements. Consider, in particular, whether pay programs support performance objectives and company strategy.

Communicate: Elaborate your pay story in a user-friendly way in the Compensation Discussion & Analysis. Include the committee’s response to feedback: Consider a “what we heard” section that acknowledges stakeholder criticism and a “how we reacted” section that outlines responses and any applicable changes. Highlight how pay plans promote shareholder value creation or motivate achievement of strategy. For instance, measure realizable pay against company performance to demonstrate the relationship.

Directors of companies without a history of say-on-pay trouble have it easier. These directors don’t need to initiate rapport-building from a position of weakness. Nonetheless, directors should be mindful of potential for negative say-on-pay outcomes. Commit to regular shareholder communication, and plan to test major program changes with shareholders prior to the say-on-pay vote to collect and evaluate their concerns.

Performance remains the top concern for shareholders. When companies deliver it, shareholders don’t complain, and springtime proxy season should be relatively routine. But directors cannot count on having strong performance every year. With that in mind, take steps in advance to mitigate year-after effects to assure that comp committee members continue to have successful election seasons.

This article was originally published in WorldAtWork.